Today's hash will be run from On the Rocks for lack of a clear offer of venue host.
Kick off time is from 5.30pm as usual. Bring your Hash Cash - no excuses :)

Sassy for the GM
Posted by Sassy of Samoa at 12:50 pm No comments:

Hi there everyone - Tonight's run will be hosted by Witchdoctor & Imelda the Welder at Le Spa @ Vaoala.  They will also be providing the Kai, so make sure you're there for what should be an mazing run!! Kick off is 17.30 as usual and due to the length of the trail please let's try and get away on time!!
Bring your $20 Hash Cash and have a great night.  If you're not sure where the run is it's just opposite the Shrine of Three Hearts, please park on the Cross Island Road when you get there as space is limited.
On On
JG
Posted by Julia Gillard at 1:45 pm No comments:

Afternoon everyone, tonight's run will be hosted by spellcheck (formally dumbass) at Y-Not commencing @ 17.30 - everyone will need to bring a towel and a change of clothes as you will getting wet!!
See you there
ON ON
JG
Posted by Julia Gillard at 1:52 pm No comments:

It's been a while since I last posted anything on the hash site. This Monday's run will be at the Sass Home in Letogo. SOTB and Alcatraz are back for a couple of weeks and keen to host a run!

Please make sure to park down on the road and not to drive up the driveway as there is no parking up there. The house is located about 5-7 mins drive from Apia heading along the east coast road. Map is below for directions
Run will start at the normal time of 5:30pm so try be on time as this will be a bit of a bush run.

The hosts will be putting on the food so bring your running gear, hash cash and a change of clothes.

Looking forward to seeing you all there!! 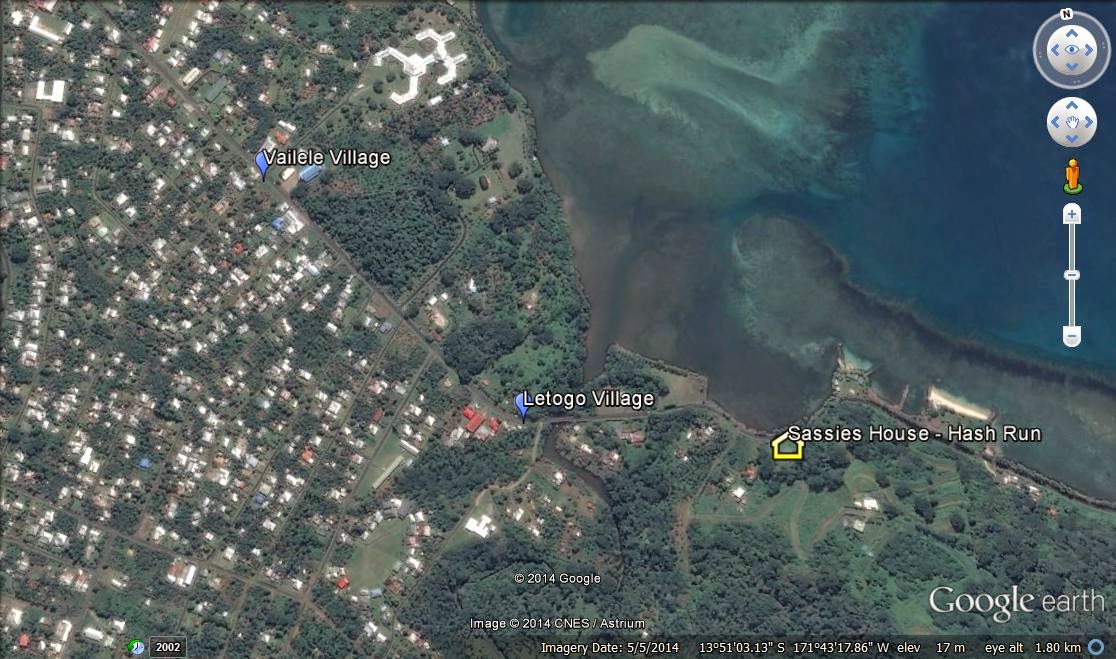 The Hash was hosted by Transporter and Lowrider at the Seyleck Auto Corrections Centre in Vaitele. It was a cool afternoon, but we could see the clouds gathering over the bay. Waiting a bit for stragglers to arrive, we finally set off with Prince as the live hare. Your Scribe is still walking but understands that Prince took the pack on a bit of a jomp around the back roads of Vaitele, including down the “scenic” Poumuli Road. The rain just started splattering as the last runners came through the gates. Godfather’s sweet nuts had suspiciously shrunk to nil – he claimed that it was the rain. As the bbq was fired up for the evening’s feast, POD as acting GM called the circle to order.

New to Apia Hash was Kirsten, who is the better half of Daniel, visiting from Oz. The retreads were Transporter (dodging bullets), Lowrider (shooting bullets), Goldfinger (healing the nation), Karaoke (babysitting), Da Head (babyhead sitting), Steve (making babies), Prince (getting wet), Alexandra (in NZ), Rona (hosing down Prince), Tupou (work). Twin Peaks stepped in to gentlemanly help with the ladies down down, but was wearing his hat so returned for a repeat.

Blowfish was appointed shoe inspector, and after some hesitant navel gazing decided that Steve was wearing new jandals. He gamely took his award using the jandal as a beer slope. Blowfish got one too for getting hit by the flick by after. Celebrity Awards went to Transporter (Observer front pages for a number of weeks) and Snake (story of snake found in container). Nafanua paddlers were honoured through Alexandra.

In This Day In History, Sassygirl BJ (451 – Battle of Avarayr between Armenian rebels and the Sassanid Empire takes place. The Empire defeats the Armenians militarily but guarantees them freedom to openly practice Christianity), Gayboy (1895 – The playwright, poet, and novelist Oscar Wilde is convicted of "committing acts of gross indecency with other male persons" and sentenced to serve two years in prison), Lewinsky (1997 – The U.S. Supreme Court rules that Paula Jones can pursue her sexual harassment lawsuit against President Bill Clinton while he is in office) and Daniel (1998 – The first "National Sorry Day" was held in Australia, and reconciliation events were held nationally, and attended by over a million people).

The GM started on her awards, the first being to recognize the paddlers who had been part of the Savaii Crossing, namely One Infection, Prince, Tupou, Transporter and joined by Gayboy who called out for someone called Sam. This was quickly followed by a Jack the Rabbit-ripper Award for Snake and Slippery for their lurid tales of slaughtering hares in NZ in full hearing of Amalia.

As the more perceptive of us had noticed by now, the actual GM was not present. Turns out he had spent the weekend at Manumea with Tickled getting pampered, but had nevertheless demurred from coming to Hash because he had the squirts! Food Poisoning Award to Wahoo.

Opening up to the floor, Twin Peaks nominated Poumuli for the Worst Dogkeeper Award, as Murdoch has been repeatedly escaping, going to Twin Peaks house and beating the crap out of the neighbourhood dogs there. Eveready was nominated for going missing on the run, apparently looking for some magic herb.

The GM stepped in noting that Rona has been absent from the Hash for a while, but that Prince should have done better in educating her on the rules of the Hash. This infraction was overlooked for now, but not Steve for leaning. This prompted Daniel to launch into a tirade about the GM and the GM’s responsibility as he was supposed to host but was only texted today about the change of plans. Further investigation brought to light that he had been told by others last week, and that the change of plans had been posted on the blogon Thursday. Failure to Compute Award.

Transporter brought the circle’s attention to the fugitive prisoners on a crime spree, which of course led to a Crime Award to Crime. At this point the Mad Monk of the Apia Hash appeared claiming to have gotten leid in Hawaii. She called forth Daniel, who was rumoured to be a real badass, a gangster and generally rather hard core. Thus from this day forth he shall be known as Possum.

Lewinsky nominated Transporter for managing to get free advertising on the front page of the Observer. The GM felt that this was a bit spurious so demanded that Lewinsky join him, with Steve stepping back in again for leaning.

Gayboy had been at work, with a long line waiting for their “food”, when a Hash Mere had waltzed in and obviously thought “f the line. Gayboy give me three dishes!”. Before Blowfish took the award, Eveready elaborated that he too had gone to said establishment and had enquired as to whence Gayboy was, only to be informed that he was sleeping in the back. Thus Gayboy joined Blowfish, in his case for the Acting Like Lewinsky Award.

The GM was about to give Possum a nomination, but misstepped on his name, so took a quick one. She then continued that Possum’s wife was chitchatting away and decided to give this as a warning. Lowrider then got an award that was a somewhat convoluted tale involving a crashed and dismantled truck and tequila. Rufie was given an award for getting to the gate before the Hare.

We then farewelled Goldfinger who is going to Brisbane, and wished her all the best in her future endeavours in finding a husband! The Hash Anthem was duly presented. She thanked the Hash for all the good memories and invited us to Brisbane, but bring pocket money!

The Hosts and the Hare were saluted and then a grand bbq feast was gobbled up. Watch the blog for next week’s run. Sassy will be the Scribe while Poumuli is away.
On On
Poumuli, IKA Slit
Posted by Sassy of Samoa at 7:23 am No comments: