Hi to you all. Next weeks run will be hosted by Hot Nut/s, Brenda and Tammy up at Vaoala on Bank Steet. Head up the Cross island road and turn onto Bank St (Where Bits & Pieces and Goer Live) and head down that road, The house is on the right hand side after the bends in the road. Look out for the Outrigger Canoes in the front Lawn.
If you get Lost, call Tammy on 7205455

There will be a Halloween Theme, so wear your best Halloween Costumes..Those not dressed up will be punished by the GM on the night.
On On 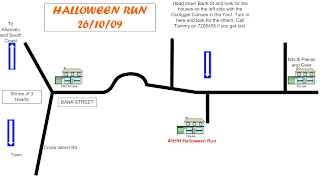 Morning, due to the lack of hosts, Hash will be in town behind the Tourism Fale. It will be a BYO Food run andwill start at 5:30.
I think there will be a live hare unless someone can volunteer to set a run. Map is below for any newbies :) 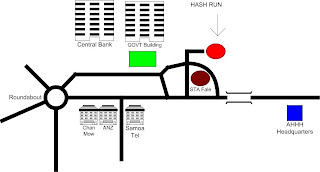 Morning to you all.
Next weeks White Sunday run on the 12th will be hosted by Tony Blair and Selana at their home in Tuaefu. This will be a BYO Food run. Snake, are you able to bring the BBQ please. The pool will be filled and ready and the run will start at 2pm seeing that it is a public Holiday!

See the map below for directions
On ON 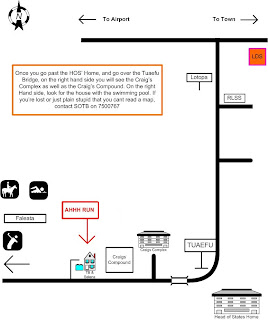 Waiting for latecomers delayed the departure of the truck to the secret destination. Lewinsky driving like a bat out of hell, no pink and late! Made a loud entrance in front of the truck, followed by Kiwi who had no idea how to lock his truck, after much encouragement from the crowd gave his keys to a Hash merry to drive to a safer location.

The truck took off, FBI lost his pink cap and that set the pace for the trip…. He couldn’t wait to jump out and find his precious. The truck stopped at 5km for the walkers and continued on to the 7.km mark for the down hill runners.

In the circle Eveready spoke about Karaoke and Desirables birthdays and expressed his thanks to the Hash Family for the love, kindness and support at the time of the accident. To Desirable “On, On”

Visitor Prue AKA “Roxy the Geologist”, was overwhelmed by FBI’s need to assist the new maiden, some think he was just trying to replace his pink hat!

Nola donated the pig! A down, down delivered for her generosity.

Kiwi & Lewinsky down, down for wrecking the speedy departure.

Mad Hatter, down, down for not knowing if she’s a runner or a walker, and refused to get out of the truck with the runners.

Greg & Swinger went for a walk on the weekend and got lost again. ACDC said that’s the 2nd time, it happened four years ago on the same walk.

Sara, down, down for the superwoman award, she keeps coming in first.

Blow Me, down, down for the “totally gay” award he needs to start drinking like a man and loose his wifes’ shirt.

The Monk arrived, only after trying to mount a dog!!! And called for

Greg who has been wearing far too many fancy pants and getting the girls excited so will now be known as “HOT NUTS” ACDC wanted to know which one is the hot one.

Seema who loves to express herself in all areas of pain, ecstasy or anger, will be known as “SCREAMER”

Rebecca is known for wanting to get her clothes off and swim around freely, will be known as the “SKINNY DIPPER”

Mattie, loves to bash people around, will be known as the “SLAPPER”, the Hash family hope she doesn’t live up to her name.

The crowd wanted clarification whether it is HOT NUT or NUTS?

Lewinsky nominated Eveready for the “dream car award” a work in progress. A battery was found so all could here the engine.

Special Guest Nathan finished the circle with a spectacular dance.

Just confirmed with Snake, Snake's 50th Birthday Hash Run is on! The food is ordered and the beer is COLD. See map below if you need directions.

Good Morning to you all,

As per discussions last night at hash, we will be having a special hash run tomorrow, Wednesday 7th October 2009 to be hosted by Snake at the Snake Pit to celebrate Snakes 50th Birthday. Hash starts normal time at 5:30 PM...Looking forward to seeing you all there to celebrate this special day with Snake and the family. 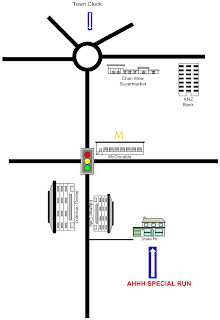 Editor: Below is the beautiful eulogy given by the Head of State at Godmother's (Anna Tui Annandale's) service Wednesday morning. Note that Tuatagoloa references Godfather.

I was hesitant to talk last night because I was aware of Tui’s discomfort with politics, politicians and status.

My reservation was allayed when Tuatagaloa asked me after the service to say something this morning.

I decided to speak because I felt that his request was also hers.

Nothing becomes Tui more than the manner of her leaving. As Carol said last night, in this tragedy she put the safety of her mother and Joe before her own – a gesture underlining selflessness and humility.

Her family admits that her funeral was carefully planned and today one senses that she’s still very much in command.

She has orchestrated the time and space: the order of the rituals, liturgies and testimonies. The programme was and is: the funeral within twenty four hours of death; a quiet family service at 8pm; a funeral service at Tanumapua at 5.30am; and her burial at Siusega.

All this is metaphor for moving on lest we dwell too long on death and tragedy – a salutary lesson not only for our family but also for a grieving nation.

As the wife of Tuatagaloa, she is entitled to the protocols, rituals and conventions befitting the funeral of the wife of a Falealili grandee.

This includes a funeral service at the official residence of Tuatagaloa in Poutasi. But, in opting for less fanfare, Tui was and is claiming space: space for privacy.

She wanted a funeral where the ambiance would be markedly different in tone and context; she simply wanted to move on with grace. Whereas she became the mainstay of the Poutasi hierarchy, in the end she preferred a quiet and private funeral.

Her outstanding gift to us was the example of how she eased her way with finesse and aplomb through the different corridors of Samoan society. She would reincarnate herself many times, sometimes all in the same day.

One moment she could be entrepreneur, the next a chair of a charitable organization, or Board member of an art or culture group, or a lead person in the village women’s committee, or a delegate to an annual Malua EFKS Fono tele.

All this achieved with quiet wit, thoughtfulness and grace. Through this she brought people from different persuasions and cultures together. This is high achievement.

She saw the Sinalei staff not as workers or employees to be bullied or put down but as human beings that you need to work in partnership with.

She did not pretend to a knowledge or expertise that she did not have. She was quite comfortable in learning from others or from books. She was successful in the village because she had the common touch; she understood people and was humble and modest.

How did she do it? Through an innate sense of humility. Whether she knew it or not, her humility gave her an uncanny insight into what the Bible refers to in Ecclesiastes as the “vanity of vanities”.

Tui was humble yet not meek. She sought and celebrated simplicity which was not simple because of the allusions to metaphor and nuance. She was most accommodating and alluring when she stood firm on what she believed to be principle.

Tui was a deeply spiritual person. For her, God was not distant and formidable; God was always present and an integral part of loving. He was present when she planted flowers, when they sprouted, budded, blossomed, bloomed and withered. He was present in her love of animals, especially in her love for her dogs.

He was truly present for her when the sun rose and set. He was present when she loved Joe, her family, friends and especially the disadvantaged. He was present when she and Joe prayed in the morning and in the evening. Knowing her, she would have prayed for the last time for the safety of Joe, her mother Anna and Tafa, her mother’s nurse. I believe God heard and heeded her prayer.

If I’m struggling to capture the essence of Tui, then I invite you to take a good look at her face, her glow, her gentle smile and her sense of inner peace. That is her legacy.

I loved Tui dearly for a very simple reason: she loved Joe, and because of this love, Joe and her family and all who came in contact with her became better people.

This week's Hash is a BYO Food run - so please bring your own food. We will run from the Samoa Tourism Fale downtown. Although hearts remain heavy, a healthy run, good company, and ice cold beer may bring a smile or two. See you there,

Godmother Donations Due Sat at Noon

As we discussed Wednesday evening, in honor of Godmother, Anna Tui Annandale, we are putting together a donation to be given to Godfather. Mismanagement will be supplementing our donation to help. Please drop off your donation to the usual collection points:

Please get your donations in by Noon on Saturday. Just give what you can. Mismanagement is hoping for about $100 per member.

Click here to read and share memories of Godmother Tui.
Posted by Eugene at 10:33 am No comments:

Email ThisBlogThis!Share to TwitterShare to FacebookShare to Pinterest
Labels: notice.

The GM, Princess of Darkness (aka POD) and Lewinski are trucking supplies to the Red Cross to assist the tsunami victims.

Please, if you have any spare clothes, shoes, towels, flashlights, cans of food, etc., drop them off at the Yacht Club, On the Rocks, or at Lewinski's and POD's home in Taumesina.
Posted by Eugene at 10:24 am No comments: