Hash Run 1917 is being hosted by Cunning Linguist and Snip'n'Tuck at their house in Vaivase-Uta.

The theme is HAIR as CL has none and S'n'T has loads!

House is on Vaivase Uta Road, just before you get to the large sports field on the right - "Tanoa le i'a" - the driveway is on the left; house is at the back behind another house. CL normally puts something on the rubbish stand! There will be lots of cars parked before and at a small neighboring shop. You'll see it!

Please leave your car at the main road!!

Don't forget your hash cash and your hair spray!

The Hash was hosted by Pussysnatcher, Snatched, Toa and Catcher at their house in Apaula Heights. It was a nice cool day after the rain and the Hashers set off into the bush. The trail meandered through the jungle until we came out at the top of Apaula and then followed the road home. It was quite a challenging run, but not the usual killer we expect from Pussysnatcher.

This Day in History Awards went to King (AD 41 – Roman Emperor Caligula, known for his eccentricity and sadistic despotism, is assassinated by his disgruntled Praetorian Guards. The Guard then proclaims Caligula's uncle Claudius as Emperor), Poumuli (1523 – Christian II is forced to abdicate as King of Denmark and Norway), Twin Peaks (1788 – The first elements of the First Fleet carrying 736 convicts from Great Britain to Australia arrive at Botany Bay), Nom Nom (1931 – Sir Isaac Isaacs is sworn in as the first Australian-born Governor-General of Australia), StrapOn (1960 – Little Joe 1B, a Mercury spacecraft, lifts off from Wallops Island, Virginia with Miss Sam, a female rhesus monkey on board), Lewinsky (1993 – Bill Clinton is inaugurated the 42nd President of the United States of America), and Karaoke (Feast Day of St Francis de Sales).

On the run, Pussysnatcher had given instructions not to trample any plantations, but Snip & Tuck ran straight over one. Jonathon was also awarded for his barbed wire skills. Also the assurance that there were no problems with dogs on the trail was false, thus Pussysnatcher joined.

There had also been a March for Women’s Rights, which went to Peeping Clam and Snatched. Australian criticism of Chinese aid to the Pacific went to Titty Galore and Nom Nom. Opening up for nominations from the floor, Cunning Linguist nominated Poumuli for practicing and fixing hair in the car. Ge joined for a Jealousy Award for having  no hair, while Witch Doctor was a latecummer.
Nom Nom nominated Alex for overachievement for running Mt Vaea, and he was joined by Poumuli for no longer doing that. Paul was also nominated for the noises from his sword interrupting proceedings.

Reverting to the circle Twin Peaks nominated Poumuli for giving directions but not explaining the theme, while Lewinsky nominated Tittty Galore for excessive advertising, joined by Godfather. Jonathon got nominated for saying he would bring more med students and then didn’t. Poumuli tried to nominate Pussysnatcher and Snatcher for their dangerous driveway and failed, while Alex’s cellphone went off.

We then feasted
On On

The Hash was hosted by Princess Fantapants, Dannii and Paul at their house in Siusega (past residence of Screamer the First and venue of many a Hash). The run was set by Nom Nom on this  rather hot day. Out we went past the Catholic Church and around the Faleata sports complex. Coming around on the Siusega side there was a detour down to Swinger’s compound where Nom Nom abides. He and Sassygirl BJhad arranged for all Hashers to do 10 push-ups, 10 star-jumps and have a shot of something that tasted like kerosene, but was in fact Niu Voka. Then it was on back to the house, where the circle was called by GM StrapOn. 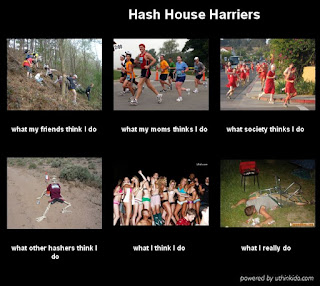 New to Hash were Jonathan, a medico, brought by someone called Courtney. There was the ANZ neighbour whose name escaped. Lemiki and Ti from Fiji brought by someone called Nynette. Josh brought by Snip & Tuck. So Sassy and Lewinsky did a down down.
Retreads were Sassy (looking for a man), Fanta (leaning), Dannii and Paul (honeymooning), Karaoke (mowing the lawn in Auckland), Princess Snip and Einstein (hanging out), and Matthew (forgotten his hash name, hashed with us 20 years ago).

For staying away from Hash so long, Matthew had his served in a sauce pan. He thought his Hash name should be Hashtag, but the King suggested Toetag.

Shoe Inspector Nom Nom found Ti and Lemiki, but Nom Nom took it on their behalf.
Celebrity Awards went to Gabby (quoted in the paper) and Godfather (there was a fire in Siumu after he had consumed too much of the extra spicy goulash).

This Day in History Awards went to Poumuli (1814 – Treaty of Kiel: Frederick VI of Denmark cedes Norway to Sweden in return for Pomerania), Sassy and Thom (1900 – The United States Senate accepts the Anglo-German treaty of 1899 in which the United Kingdom renounces its claims to the Samoan islands), the ANZ Banker (1960 – The Reserve Bank of Australia, the country's central bank and banknote issuing authority, is established), Lewinsky (1998 – Lewinsky scandal: Matt Drudge breaks the story of the Bill Clinton–Monica Lewinsky affair on his Drudge Report website), Karaoke (Feast Day of St Francis), Godfather (Feast Day of St Titian) and StrapOn (International Fetish Day). The King requested more information on St Titian.

The GM had several awards. On the run King had driven past the pack, all sweating and panting, teasing them with sweeties. Before King took his award, Godfather reminded that there would be an Elvis impersonator at Travellers Point – if King goes, will that make them Elvi?

At the pitstop, Godfather had insisted on showing off, and did 30 push-ups instead. So why not do 50 now? Lewinsky had been persistently shouting come on you fat bastard, ostensibly to himself, but POD was in front of him several times, so a Spousal Abuse Award to Lewinsky.

The newcomer Jonathan had claimed to be a terrible runner, yet he was far and away the best of the pack (not saying much, but…). He was joined by Coinsave and Will who had stopped to watch a girls volleyball game, and they stood there for hours. They got the GF Proud Of You Award. Witch Doctor was a latecummer.

Overstayer and Thom had avoided the pitstop, so the GM made them do the push-ups and jumps, followed by the shots. POD had her birthday last week, and also renewed her vows to Lewinsky. The King explained that he wanted Lewinsky for a double as he had forced drinks on him, and also for the DJ falling asleep.

Opening up for nominations, Sassy had noticed some foul smells around the place, and gave the down down to Fanta and the ANZ Banker. Cunning Linguist wanted to give a Carelessness Award to King for losing his glasses, but this became a Heroes Award for CL.

Godfather was moved to see the two Fijians at Hash to remind everyone of the great opportunity in the Interhash being organised in Nadi in late May this year. He urged the Hash to consider attending with the estimated 6000 runners from around the world, and asked POD to gain share the information (which she has now done).

Karaoke was very interested in going, but she said she was broke, so she nominated the ANZ Banker, who at Poumuli’s urging was joined by Coinsave.

Sassy was really grateful to Fanta that his toilet wasn’t working, as her phone had fallen in. Coinsave gave an Undercover Celebrity Award to Poumuli for singing at the Oka Festival. (It was 3 Little Birds, not No Woman No Cry).

Nom Nom thanked Overstayer and Thom for the finely engraved mugs, and POD nominated Karaoke and King, for Karaoke’s dance with, and disappointment in performance of, her dad. King was added in for raising expectations.

The King obviously hadn’t had enough, and claimed to set the record straight that the lawn mowing in Auckland was in fact a Brazilian wax. Ungrateful Award to King.

The hosts and the hare – Fanta, Dannii, Paul and Nom Nom were saluted before we had a wonderful feast of curry.

Next week is hosted by Pussysnatcher and Snatched in Apaula Heights.