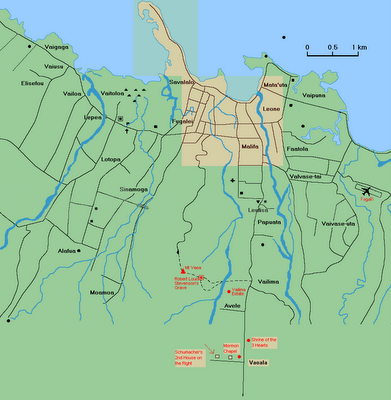 As per Sassy's previous post, Schumacher will be hosting tonight's hash from his residence in Vaoala (see attached map).

The keg's ordered. See you there.

The Brewmaster, Mr. Whippy.
Posted by Eugene at 12:11 pm No comments:

Talofa all
Run 1339: 4 December will be hosted by Eveready and Karaeoke at Lotopa, behind Adria's Cakes
Run 1340: 11 December will be our XMAS RUN. The venue will be advised in due course.
Feel free to email me if you feel up to hosting a run within the next century on sassygirl@samoa.ws
Posted by Sassy of Samoa at 2:14 pm No comments:

Talofa to all and the new hashers

For your information, the following hashers make up your Mismanagement Committee. Feel free to ask questions or voice your opinions to any of them....no long winded whinging thank you.!!!

SassygirlBJ is the current official bearer of bad news and ass kicker!! as well as arranging for upcoming runs.

Posted by Sassy of Samoa at 2:12 pm No comments:

Shafter and Flo enthusiastically invite all the hashers to a party to celebrate Sole-less's 21st Birthday at Tiafau House, next door to Millenia.

A keg, piggy and umu is on the menu. Feel free to bring a salad if you are that way inclined.

You will not be penalised if you wish to bring a bottle of your favorite drink to share with the birthday child.

Gordon Flesh and Son of the Bitch to arrange for the music and Lezzy darling to bring the noise making box.

So pass this onto the others and for goodness sake try not to turn up when everyone is half-cut at 12pm. Early would be nice!!!

So see you all there then.

SassygirlBJ
Posted by Sassy of Samoa at 2:05 pm 2 comments:

Talofa lava dashing hares (not!) and those sexy meres
Well done to those die-hards who braved the pneumonia inducing conditions to join Alex and Nicole at Vaivase-uta for Run 1337. The regulars were joined by a very enthusiastic bunch of American new boots who were thoroughly interviewed as to what they are doing on island.
The group set out on a nice trot in a light drizzle through the bushes and were also continuously hassled by stray dogs. Part of the group was overhead discussing the beauty of carrying some weapons (the type with silencers attached) to put them out of their misery.
On the return of the small-ish group, found Kiwi and Snoofy well into the cooking whilst Schumacher had disappeared for hours to buy some sizeable cups for the nectar.....goodness knows where the heck he disappeared to for it took a long time.
Judging by the degree of merriment demonstrated by the group come 8pm, leaves no doubt that they all had their fair share of vailima. To help speed up the keg, the GM called for a boat race between the Americans and the Aussies, with a new addition that each person had to eat one sausage or a sushi prior to drinking. The Americans obediently did as instructed while Nicole of the Aussie team cheated by upending most her beer over her head. This was followed by Samoa vs The Rest of the World. Needless to say the team of Flo, Son of the Bitch and Kiwi toyed with the ROTW team and won by miles as was to be expected. Several awards were dished out. First one to Sassygirl, for providing additional glasses for the hash mugs. She received several more later on for spanking herself in the hash circle as well as some other misdemeanours the previous Friday night at the impromptuous Hash party at Headquarters. Similarly ACDC received several, one for false accusations that Schumacher was not at headquarters, plus a host of other stupid stuff-ups. The new boots impressed the die-hards with their "downing" abilities. No doubt they will be at next hash. There were so many more awareds that i cant recall any more as i had more than my fair share of down-downs. The team did well because the keg was lopsided come 8.45pm. Others threatened to head off to headquarters whilst the rest disappeared goodness knows where.
Is there someone else out there who wants to be "Hash Trash"
Next week's run will be hosted by the very Single Schumacher from his home at Vaoala. A map will be posted shortly if i am up to it..LOL
Pls check out the following blog for the Saturday party.
Thanks again Alex and Nicole...no doubt there will be some hash naming forth-cumming soon.
ONON
sassygirlBJ
Posted by Sassy of Samoa at 1:24 pm No comments:

Last night saw a major increase in numbers at the hash, thanks to the Brewmaster's family and friends who were here for Mr. Whippy and Louisa's wedding. Congratulations again to the Barkers and we look forward to a lot of little Barkers running around soon...terrorising the hash clan..

Lambada and Pavarotti, who were showing far too much affection in public last night have offered to host next week's run from their home at Vailele....ummm close to SassygirlBJ's home, which means she can go straight home without visiting headquarters.....not!

A map will be forthcoming shortly if i get around to it.

LOST AND FOUND:
1. Some male shoes from last night's run...and no i went home alone
2. Flash Gordon's shades....nice ones too
3. Ladies blue sandals from the White Monday's run are still in my car....very soon they will belong to the owner of the car if no-one claims them..

Dont forget the 20K, 10K and Kids 3K Fun Run this Saturday. I have registration forms if you are interested. There will be NO RACE DAY REGISTRATIONS.

onon
SassygirlBJ
Posted by Sassy of Samoa at 8:32 am No comments:

Mahalo all you hashers!!!

I have registration forms available for the above runs. Race Date: 11 Nov 2006 with the deadline for Registration 9 Nov 2006. NO RACE DAY REGISTRATIONS.

So get your a into g and stop by and see me if you haven't registered already. Drag your family out for some fresh air and exercise

SassygirlBJ
Posted by Sassy of Samoa at 8:26 am No comments:

Hallo all
sorry about the delay in blogging this: Today's Run will be from Tiafau Fale and will be Crabs and Bloody Mary's last run. Crabs has kindly offered to shout the keg. The rest of you, ensure you bring something edible to throw on the bbq. If you like to eat a lot, then ensure you bring enough to cook. If you are on a diet like me, well then, .....seafood diet it is.

Run will be SAT5/person tonight. This goes to the T-shirts and please don't bellyache about paying. Your mismanagement do not want to hear about it.

See you all then

ONON
SassygirlBJ
Posted by Sassy of Samoa at 1:30 pm No comments:

Unfortunately, all the rumors are true. Mr. Whippy will be tying the knot. Hashmen are invited to join Whippy and his 'less' crazy bro's from overseas for a stag party at Hennie's from 7:00 - 10:00 PM. Rumor has it that the men plan to crash the hen's party thereafter. Mr. Whippy will shout the first few rounds of beer, so try to hit Hennies before 8:00.