Hi all meres and hash men who are departing for Manono today, Fri... please be advised that our new departure time from Manono uta wharf is now 5.30 pm due to the low tide being spot on 2.30pm.
Sorry for any inconvenience caused. Call 7574250 if you have any other queries.

this is definitely too late in the day, but just in case you are hooked permanently to your phone... we have just got a notice from Enforer that low tide on Fri co-incides  with the 2.30pm departure. We would ideally depart at 11.30 and 17.30. please text me if you can make the early one otherwise we will just arrange all the transfers for the late time.

ON ON and for the poor sad soul OFF OFF
Posted by Sassy of Samoa at 9:50 pm No comments:

This is to reconfirm arrangements made for our Easter retreat:

All those booked and confirmed for 2 nites, from Fri,  will depart Manono-uta Wharf (just past Le Vasa Resort, on the western end of Upolu Is) at 1430hrs.

Sleeping arrangements is simple and uncomplicated. First preference for lockable rooms is for the 3 families to ensure the little ones are safe and not wonder off in the middle of the nite...that goes for the parents as well :) The rest will be in open plan homes.

All those booked to go across on Sat for the run and stay: the boat will depart the wharf at 1300hrs

WHAT WILL BE COVERED:

MUST TAKE ALONG:
FOR THOSE THAT HAVE COOLERS AND WANT TO PICK UP SOME ICE, DARREN HAS OFFERED US THE SHAVED ICE FROM APIA EXPORT FISH PACKERS AT THE FISH MARKET. YOU CAN CALL HIM ON 7770686 TO ARRANGE TO PICK UP SOME ICE. SUGGEST YOU DO THAT TOMORROW MORNING FOR THOSE PLANNING ON GOING FOR 2 DAYS.

Sassygirl
Posted by Sassy of Samoa at 9:56 am No comments:

Slight change of plans for tonight's run. We did have a host but he had to cancel last minute, so we're now going to have our BYO run at OTR tonight. The run will start at the usual 5:45pm and we will have a live hare tonight.

We will also have our Keg and Softies tonight so please bring your hash cash and something to throw on the BBQ.

See you all then!

Talofa to you all, TGIF...Hope you've all had a lovely week.

Directions: Head up the Alafua Road and go past Don Bosco. Once you pass Don Bosco and go over the speed hump, its the 2nd Driveway on the left. You should see some paper or flour on the road side. Head to the back house at the end of the driveway. Map is posted below if you cant find your way.

The hosts have offered to provide the spread for the run so just bring your hash cash and a change of clothes. We will have our Keg and Softies.

Do not expect this trash to be flashy or colourful like Poumuli, Tallyho or Desperate Housewife’s posts…I think I am suffering from the early onset of Alzheimer disease so here goes…


Late in the afternoon, I got an urgent directive from the GM SOTB to post the venue of the run, given that he was a bit pre-occupied with Alcatraz who had just arrived early morning. There being no organised run, the second home at OTR was yet again the venue of another memorable evening for all the wrong reasons…but still funny.
Tallyho was the designated Live Hare…much to the amusement of the hashers who had other versions “barely alive hare” “old hare” … needless to say TallyHo, being the fit FRB that he is, set off around the back of the police station and the acting scribe last saw him heading towards the hills…what would I know, I short cut all the time J


Lewsinsky, being the helpful soul that he is, offered to stay back and guard the keg, whilst everyone took off after Tallyho.
On the return, the GM launched into cleaning up the BBQ and started cooking whilst everyone dug into the nectar and whilst trying to recover from the apparently hectic pace set by the hare. Finally it was time for the onons:


New Boots: Rob Pereira, who had somehow recovered said that the most training he has done in 32 years was always done at a bar; Mike, who was visiting from NZ and promised not to return the following week, and Rosalina who has just returned home after 30 years in California…for the geographically challenged, that is somewhere in the United States of America, I think..lol. They were all given a down down.
Retreads: Julia Gillard’s lame excuse was work related, Alcatraz took 5 weeks out in Aussie to chill, Madam Flash and Graft, visiting for 2 weeks after an absence of 7 years. Poor Madam Flash wasn’t her usual self. She’ picked up  a bug en-route to Apia.


New Shoes: Hotflush was given the honor of sniffing out the new shoes. He spotted Rob Pereira and Rosalina’s new footwear so they were made to drink from them.
Celebrity: Da Head had the back page of the Samoa Observer all to himself, where he is pretending to give something away to unsuspecting businesses; Sexpot took it for his bank having donated several computers to someone?; Ex flat mate CB made to take the DD on behalf of Pussy Snatcher and Snatch thanks to their ex housemaid robbing them blind.


Day in History: Poumuli emailed these as usual..1911 International Womens Day – Ringring took the DD for Slim Shady; something about a blonde Barbie doll, so Ally was the token blonde; Canberra day was given to Julia Gillard; something else about cyper porn was awarded to the GM…smh
Other Awards: Transporter came up with  some lame excuse for not having the hash mugs so was duly punished; during previous week’s run, Irini saw fit to sit on the table holding the mugs, the table collapsed breaking one of the mugs (according to Transporter); Sassy was in fine form by now and got in the first awared…she called for GM to take a DD for late advise of run venue; then got on CB’s case for not using his common-sense to clean up the BBQ; Julia Gillard whined about Transporter and SOTB not telling him about a pjama party at YNOT a while back;


The Cockblocker award was given to Lewinsky and Crash for constantly calling up the GM at home and finally turning up at his place.
At this point of the proceedings, Carnal Knowledge and two new cummers rocked up and were duly given a DD for late cumming. One friend introduced himself as Randy or was that Rowdy (can’t read my scribbling) to which Ringring responded with an enquiry as to his marital status…the other friend was introduced as Ball Wrecker??.  Both were on island to celebrate Master Ryan’s first birthday.
Sassy jumped into the foray again with a blonde moment award to Karaeoke who had recently been to NZ for medical check-up but seems she just needed a break and some retail therapy.


Transporter told a long winded story about CB putting pressure on him to get his car fixed by Saturday. After his boys worked 2 days and into the nite, CB advised him later that he did not need the car after all. CB went down.
Sassy nominated Godfather for deserting his duties the previous week where she had to put up with the tone deaf hashers and their bloody awful singing.
Godfather, called for a toast to Graft and Madam Flash who first started running hash in Samoa around 30 years ago…pretty old this Graft guy! He also pointed out that there are no privileges in this hash for the older hashers, such as allowing them a seat during the awards. Godfather then went into confession mode… he did acknowledge that he would have done the same with Tittyg in the house…  confess that is…Godfather ran his heart out today and on arrival he went to high 5 Irini, only for his right hand having a soft landing on Irini’s left breast, and according to GF, one of the pleasures of old age is the young ladies do not take offence easily…he is aware what would have happened had he been a much younger lad … a good right across the kisser would have been the correct response J


Prince then shared the outcome of the two Nafanua Men’s teams during the Saturday 10km competition where the B team, with Transporter, Prince and SOTB beat the A team which included CB and Xavier. The losers were made to drink.
Tallyho brought forward the shrine, opining the fact that Poumuli has fled overseas again where-as Tallyho had a dried piece of copra from the previous week which he wanted Poumuli to drink out of. Closest living relative Witchdoctor took the down down, thank goodness, not from the dirty copra cup.


Hotflush, adorned with the Angry Bird hat, added that after much navel gazing and trying to find his inner self, was convinced that there is a soul at hash, who, under a calm exterior is actually seething with anger and deserved the AB Hat,..Today landed with the hat!
The group, led by Tallyho launched into the Hash Anthem in honor of Carnal Knowledge and Jailbait’s pending departure to their new post in the Cook Islands.


Finally, a DD for the lively hare, Tallyho and on to the BBQ and more nectar of life….

Tonite's run will be at Headquarters No.2 On the Rocks...as the GM is a bit pre-occupied and we have no official Hare Raiser, I am posting this on behalf of Mismanagement.

BYO some meats to throw on the bbq to share if you want to have a bit of a feed. Run will start at 1745hrs so rock on down with your SAT15 hash cash and let's all have a merry time. Mismanagement has the beer and softies covered.

I hope that you have made up your minds about the Easter Hash...as we want to finalise this tonite.

Party at Tafatafa with Carnal Knowledge and Jailbait

CK (not the 'abbreviation' lol) and Jail baits little boy, Ryan, is turning 1 tomorrow and to celebrate we are having a party at Vaiula Beach Fales (on tafatafa beach).

All hash members are welcome. Vailima and BBQ lunch will be provided

Look forward to seeing you there.!

Good Evening All, apologies for the late posting. Tomorrow's run will be up at Nu'u (past Tafaigata Rubbish Tip) with Snake, Fang and Slippery. Head up past Tally Ho's Castle, and keep driving till you reach the Rubbish Tip, continue on the main road that bears right and you will come up to the Nu'u Crop Division. On the opposite side, there is a factory called Pacific Oil who produce Bio fuel, that is where we will have our hash run.

The hosts have offered to put on the spread so no need to bring anything but a change of clothes and your hash cash. We will post a map tomorrow once I have a faster internet connection and I can download a suitable map from Google Earth. 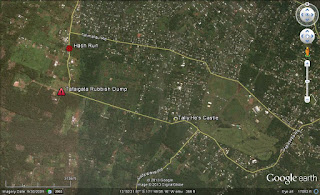