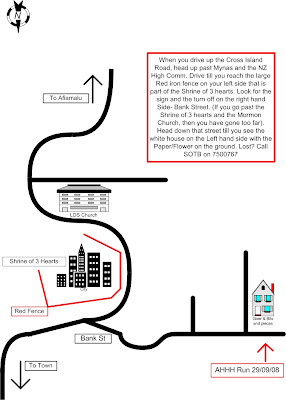 Sorry for the delay... net access here has been out since Christmas day.

Bits & Pieces and Goer have kindly offered to host Hash Run 1446 at their home in Vaoala off Bank Street (see map). This is a BYO Food run - so be sure to bring your own food. And yes, the standard Hash fee will be collected.

Season's greetings to all hash members here in Samoa as well as overseas. The holiday season is upon us again and the start of another year is right around the corner. This is a wonderful time of the year and I hope we don't get too carried away with the mechanics and logistics of everything and forget the enjoyment side. Please take time to enjoy the wonderful xmas music, the delightful xmas lights, the many parties where we can meet old friends and acquaintances. Please renew and treasure your friendships. It's one of the most precious gifts we can have in this world. That is one of the main reasons Hash means so much to me personally.

When I came to samoa 10 years ago, after being away for many years, I didn't know very many people. All my friends from when I was 17 years old have died, were in jail, or have been kidnapped by aliens. Then I joined Hash and I immediately had 20 friends to my name.

A year ago, Karaoke and I went to Australia and I ended up in the hospital emergency room. The doctors there said that I shouldn't even be alive, but by some miracle I made it through. When I got home I decided to celebrate my second chance at life, so I made a list of all my friends to invite to my back-from-the-dead party. When I looked at the list, 90% of them were hashers! That's when it hit me just how much hash means to me.

As I reflect upon 2008, I realize that in the hash world, a lot has happened. Here's a few highlights that I can think of from the top of my head.
A quick glance back and a few new hash names jump up
If that's not the craziest bunch of names for hashers then I don't know what is.

I know there are a lot more events and incidences worthy of mention but my excuse is that I only took over as GM in July; before that my records are not too good. All the above mentioned highlights have been happy and joyous ones except for one. I'm sure you all know that as the untimely passing of our brother Shafter. As far as I can recall, this is the first time hash has been this heavily involved in a hash member funeral. This funeral was a little different in that from the very start, it was planned not so much as a cause for sadness and mourning but as a celebration of a well lived life. This event really brought the hash family closer together and it brought out the best in all of us.

For 2009, lets all look forward and help support these theme runs for the near future.

One of my New Year's resolution is to be the best GM I can be. I will try my best to make hash not only a fun but also an exciting outing. I'm always open to new ideas and constructive critizisms (but not too many). I'm sure with your help and support we can all have lots of fun at hash. What do you say we make 2009 even better then 2008. I think I did mention it before but I'd like to repeat it here that the theme for my administration is "PARTY HARD OR GO HOME"

And if I haven't told you before I'm telling you now. THANK YOU to each and everyone of you for all you've done for hash in general and the GM in particular. I really didn't want the GM job because I didn't think a non-drinking and non-running hasher should be a GM. I took the job hoping you would support me but you have not only supported me but you have accepted me and for that I will always be grateful. A special thank you should be given here for my beautiful sidekick Karaoke for the unwavering support she has given me. Truth be told, I couldn't do half the stuff I've done without her help and support. (Karaoke, I'll drink from your shoe anytime!!)

Finally, I want to ask for your forgiveness. In the performance of my GM duties and in my efforts to improve hash, I know I probably offended or stepped on a few toes, maybe even all the toes at one time or another. Please know that none of my actions are ever intended to offend anyone. What do you say we bury the hatchet and start over again with the new year? Lets not look back to past indiscretions cause it will only give us a stiff neck. If you can forgive and forget, I give you a solemn promise as your GM that many many down downs will surely come your way!!

From the GM and the entire mismanagement crew, I want to wish all the hash family (especially our members who are overseas for the holidays or who have moved overseas) a very merry Christmas and a very happy New Year where ever you may be. May the force be with you!!

On On from the GM

PS: Please take care of yourselves this holiday season so that we can hash together again in 2009.

Next weeks run will be at Puipaa, in Misa Telefoni's 1st compound. This is the compound directly opposite his driveway. This should be an interesting run as we haven't really done a lot of runs out this way. Dont forget to bring a set of spare change as there is a lot of bush out this way as well as water..he he he..

If you could also email through confirmation of numbers. We'd like to see how many people to cater for as well as whether hash will order a keg or not.

email confirmation through to me; ant.sass@gmail.com or you can call/text me on 7500767 (and no this isn't advertising) If you can be bothered emailing or texting or calling, then post a comment at the bottom of this notice and i can count you down.
See Map below for Directions... 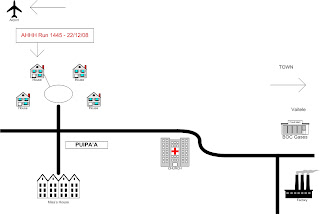 Below is a small thank you from Flo and the kids to our AHHH Mob..Feel free to post any comments below...
Thanks Flo.. 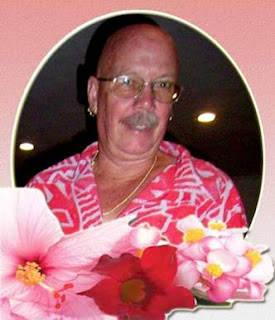 We are all travelers in the wilderness of the world, and the best that we can find in our travels is an honest friend. (Robert Louis Stevenson)
It is with heartfelt gratitude that we acknowledge our families and friends for your condolences and extension of sympathy for our family for the loss of our father, loving partner and a best friend to all the hashers; Christopher Alan York Hewson also known as Shafter or Drafter by old hashers.

Thank you for your prayers, condolences, messages of sympathy, your comforting company, your humor when at times we feel as if we are alone and assistance; be it financial or in kind; we thank you for your compassion and generosity.

We thank you especially for all the work, time and monetary contributions that you all put in to build his final resting place at Vailele Cemetery and to help us with his funeral arrangements. Please know that it has meant a lot to me and the family.

Perhaps you sent a lovely card; or sat quietly in a chair
Perhaps you sent a floral piece; if so we saw it there
Perhaps you spoke; the kindest words as any friend could say
Perhaps you were not there at all; just thought of us that day
Whatever you did to console our hearts
We thank you so much; whatever the part.
We are now back in Auckland and we look forward to seeing you all next time.
Thank you from the bottom of our hearts and may we also take this opportunity to wish you all hash men and meres of the Apia Hash House Harriers back home and overseas a very Merry Christmas and a Prosperous 2009.
OnOn
Flo (Sili), CJ and Anesi
Posted by SOTB at 12:32 pm No comments: 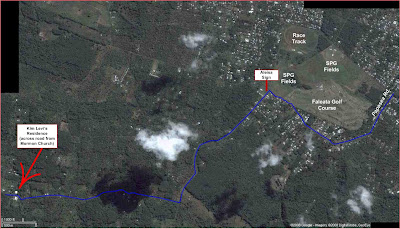 Hash Run #1444 will be hosted by Delectable at her place in Aleisa (click-on above map). This is a fantastic location for jungle runs! So bring some extra clothes and a towel so you can hose-off and enjoy the post-run activities.

The Christmas Hash Run #1443 (see map) will have a special dinner. Hash will provide the BBQ, and Hashers the dishes to complement the meal. Karaoke (Adria @ 23-338) asks that Hashers contact her ASAP during business hours to reserve their dish. Single Hashers that are "cooking challenged" need not worry, Karaoke has some easy off-the-shelf dishes you can bring; just give her a ring.
Posted by Eugene at 7:59 am No comments:

The Christmas Hash, Run #1443 will be held downtown at the Snake Pit. The run will be hosted by Snake and Fang. This is a special run where we visit several businesses and sing Christmas carols. Santa himself will be joining us. Hashers are asked to do the following:

o Dress in the spirit of Christmas.
o Come in good spirit and ready to sing.
o Bring a dish for Christmas dinner
(Call Karaoke @ 23-338 to reserve).