Talofa allDue to the poor response and offers for today's run, it will therefore be run from headquarters..."On the Locks" at Matafele. BYO BBQ if you want to eat and the run will be SAT5/person. This amounts goes to the shirts.Everyone is asked to buy their own drinks and Lewinsky assures me that he will sell his draft at cost to the hashers. There will be limited number of awards for obivous reasons.
We hope to have a venue for you next week and the following weeks.....

Dress to impress (flip flops are of course welcome)......

Hopefully you'll recognise me with gray hair and new wrinkles...

Unconfirmed reports from CIA intelligence sources in the Pacific revealed that that Mr. Whippy might be doing a runner from his AHH firm by flying out tomorrow to elope with a Samoan precious lady in AmericaJJ

As of 7pm this evening, I have deployed Agent Orange and Agent Harry Porter to the field to find more information on this breaking news. An unidentified young striking Samoan woman in her late 20s is said to have tamed the heart of Mr. Whippy, hence, he is seeking refuge in good old USA to plan his future life imprisonment with this Samoan beauty.
Stay tuned for another update tomorrow at the hash ceremony. Bring plenty of booze and chow.

Cheers,
FBI.
Posted by shafternflo at 10:36 am No comments:

Lezzie, is it you!!! the assistant Brew Master?????... the cooler and left over soft drinks are at Shafter's office

Hash BBQ, the full gas bottle is at the SHA office

Hash Mugs??? whoever's got them.. please remember to bring them

Mr Whippy, have you got somebody to arrange the keg for the next run

OnOn
Posted by shafternflo at 4:03 pm No comments: 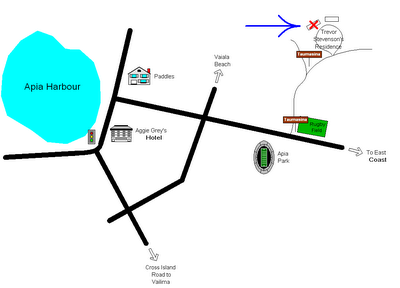 Here's a map for you newbies and our kind Samoa Breweries delivery boys. Just click on it to enlarge, then print it.

Enjoy, see you all when I return,

Run on the 24th July 2006 will be hosted by Lewinsky and POD at Taumesina. If you do not have an idea, Mr Whipster could you please scribble something for the never been to the hash before..

Please do not forget to remind your guests about the hash tradition such as when you are asked to do downdown do not offend and let them know that food will be done after our awards.

Have a good sober week

OnOn
Posted by shafternflo at 6:10 pm No comments:

Hash 1317 was kindly hosted by Eveready and Karaoke at their palace in Lotopa village. Despite the rainy weather in the evening, the meres and hares braved the gloomy conditions in search of egg -shells as the bloody rain washed away the flour which was originally used to mark the hash trail. Pleased to report a successful mission was had by all. The distraction of hash agent’s communications was an excellent cover for the actual social misdemeanors that occurred during the past week. Well done FBI.

During the special award ceremony, the following hares & meres got their down-downs from bully Grand Master (Shafter):

New Boots were introduced to the usual miserable AHHH lots

Ø FBI and his sidekick Agent Abel Cain (whom we all thought was Harry Potter) turned up just in time for the delicious spread prepared by Karaoke & Ever-ready. Without any knowledge of prior events earlier in the special awards ceremony, GM called an emergency hash circle and reiterated FBI’s long email to the hash group. Apparently, the email was read out earlier during the awards. For his CIA efforts, FBI was nominated to write the hash-trash and SOB will be BBQ Lieutenant.

Ø At the same time, Madam Soo was nominated by Eveready for wetting her pants during the run and had to change to her outing attire during the “circle of the ring” ceremonyJJ Soo, SOB and FBI accepted their down-downs, amidst the loud cheers and laughter from the hash band.

Ø Sassygirl being a Samaritan offered to drink most of Soo’s down-down in a paper cup. For her efforts, she will receive a down-down at the next hash run.

Ø While I was in the middle on completing this write-up, Agent O decided to send in her report to FBI. Please refer to her coverage in orange ink below.

However, that is not to say that the evening wasn’t free of unexplained disturbances in the force. It appears that a possible imposter (Agent Orange to provide Exhibit A), suspected to be impersonating agent-orange had infiltrated the ranks. The suspected infiltrator (identified in Exhibit A), cloaked in Agent Orange disguise, strategically placed himself between a member of the Tokelaeun Tapulega and a young Samoan chief. Motivation yet to be determined, although any discussions of pacific-rim geo-economic concerns regarding the management and investment of hash cash in the next financial quarter should be well documented for future reflective analysis. The accomplice to the suspected Agent Orange imposter (face not clearly shown in Exhibit B) was also identified. Accomplice alarm registered due to breaches of meeting protocol by his lack of enthusiasm for Agent O, assisting in the consumption of keg and B. arriving in the same car as imposter. Agent O with the help of fellow hasher Lessie procured stealth shadowing vehicle for the following suspects: ACDC, RC, Dr. Tekie, Kiwi, Agent Caine, and SOB.

On a lighter note, Flo and FBI peformed a Tokelau item to the loud singing of ACDC/RC/Dr. Tekie and cheering from Lessie and rest of the hash cheerleaders. Sassygirl revved it up by performing a solo dance, with off-note singing from ACDC. Poor Karaoke at this point in time wanted to rest but she was too polite to chase out the drunkard meres and hares. The Aussies sang waltzing Matilda, and countered by the Kiwi mafia led by Hansel and Gretel! Dr. Tekie’s request of the Samoan melody “Le Manutagi E” got everyone to sing more like a choir, and not a broken band! With the singing and dancing in full swing, ACDC decided to announce a dance show at Bora-Bora on Tues evening (11/7/06) at 1830 hours. Investigation into the nature of the long conversation between Agent O and Agent Caine will recommence at this location- Bora Bora! To end a successful hash run and fun evening, Shafter gave a word of thanks to Karaoke and Everready for the lovely spread of food, and then called the drunkard troops to proceed to headquarters- ON THE LOCKS!

With respect,
FBI
Director of Pacific Operations
CIA Headquarters
United States of Samoa
Posted by FBI at 3:09 pm No comments:

Bring your own meat or whatever you can eat (BYO BBQ )

See you all tonite 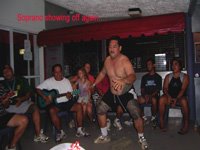 Soprano showing off his Samoan Siva and tattoo,...again!!! whilst Shafter is doing his immitation of "Let it be....!" 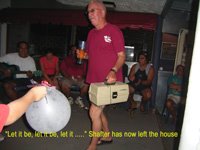 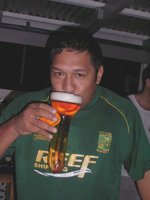 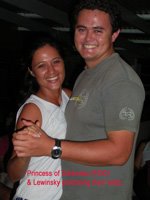 FBI, turned up late and then blended into the bushes during the awards, hence he was called up for being a prick and had to take his down down from one!

Lewinsky and Princess of Darkness (POD) practising their waltz. The two finally got engaged the day before at Aganoa Beach with Lewinsky propsing on his knees. Now that he has one foot well and truly nailed down, POD has only to worry about the other one.
Posted by Sassy of Samoa at 3:32 pm No comments: 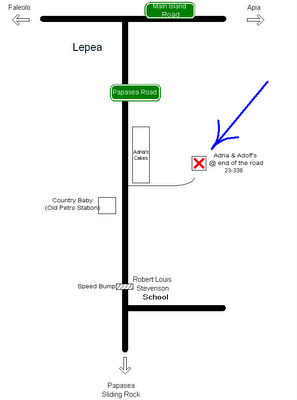 Here's a map for you newbies and our kind Samoa Breweries delivery boys. Just click on it to enlarge, then print it.

See you all there,

Hash trash and photos will be posted soon

OnOn
Flo
Posted by shafternflo at 10:20 am No comments:

Shafter and Flo will host today's run and will commence from the Apia Yacht Club at 5.30pm sharp. We will need everyone to be on time as everyone will be transported somewhere????? i dont know where....LOL

We would also like all of you to come down and celebrate POD and Lewinsky's engagement....yeah folks...its official, about bloody time too.

Again, can we kindly ask the desperate housewives and housemen to toss a salad and bring it down pls. see you all then.