The run was hosted by Slippery up past the National University of Samoa. AC/DC and Farmer Joe were dispatched as hares, a wee bit late in arriving so the run got off slowly at the direction of POD – standing in as the GM’s Deputy Dawg. The hares did not disappoint as the run went through some great scenery, gardens guarded by vicious mutts and down a slippery pipe. Poumuli went down on his muli, and would have continued if he hadn’t spotted Kiwi going along the side of the pipe. There was a good turnout with lots of new faces, but many of the walkers took a shortcut on-home. Disgraceful. 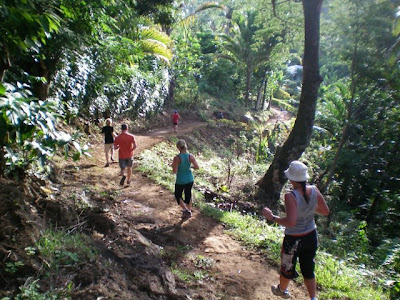 But not as disgraceful as the hares stealing Happy Feet’s pram for spreading the paper trail. 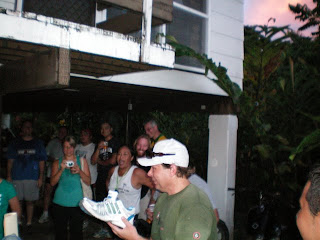 POD presided over the hash circle, and dispensed her version of hash justice to various offenders. There were a few newcomers to hash, and a number of re-treads. Gordon Ramsey had earlier volunteered himself for a down down, which POD obliged. Poumuli had written to the papers once again and was awarded for attacking free trade and the World Trade Organization. Several leaners were caught, as well as wearers of shades during the circle. Two new shoes had to drink from their shoes as SOTB had forgotten Das Boot. Delicious has been trying to call her boyfriend when drunk and has got through to SOTB instead, so that warranted a brew. SOTB got one for surfing instead of hashing, and jointly with Poumuli and Sassygirl for not being there for his mum in the hour of need (wiping of sweaty brow). AC/DC had been doing some weird yoga in the yard which also warranted a down down.

The food was an excellent spread put on by Slippery and cooked up in a storm of smoke by Gordon Ramsey, but the keg was kicked at 8.20 PM