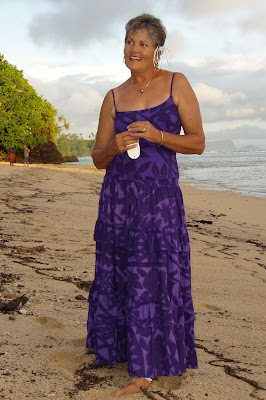 Our dearest Godmother, Anna Tui Annandale tragically lost her life to the Tsunami that laid waste to the southeast coast of Upolu, Samoa.

Godfather, Godmother, her mother and nurse were at their home in Poutasi. After the mighty quake, they gathered, boarded their vehicle and fled. But the enormous wave rushed in with great speed and overtook them, rolling their vehicle. Godfather said, “We rolled, and rolled, and rolled, for the longest time…” Godmother and her mother’s nurse were in the back seat and thrown from the vehicle. Miraculously, Godfather, her mother and the nurse survived. (Late note: Tui's mother passed away the weekend after from pneumonia.)

Within hours of her death, several relatives flew-in from New Zealand to join the family. Phone calls and texts streamed-in throughout the day.

As per Tui’s wishes and tradition, she was buried within 24 hours of her passing. The family service was held yesterday at 8:00 pm at Tanumapua, followed by a short service this morning at 5:30 at the same, immediately followed by her burial at the Annandale estate in Siusega.

At the family service, family and friends gave moving testimonies about the selflessness, humbleness, and strength of Tui. At the short service this morning, the Head of State, Tui Atua Tupua Tamasese gave a stirring testimony (click here to read) honoring our beloved Godmother Tui. Godfather, Tuatagaloa Folasaitu Joe Annandale followed, sharing some final words with heavy heart and great love for his beautiful wife. There were many tears all around.

Tui Annandale was 63 years old. She passed away two days before her 64th birthday on October 1st. Tui is a well known and loved woman in Samoa. She was the first Miss Samoa. Tui was an instrumental force in several charitable organizations, taking care to stay clear of politics. She was a loving mentor and role model for many. Several at the family service described Tui as the rock behind her husband, her family, her friends, her coworkers, and the Sinalei Reef Resort.

Key Links:
Why this tsunami was so powerful and fast
Posted by Eugene at 10:25 pm