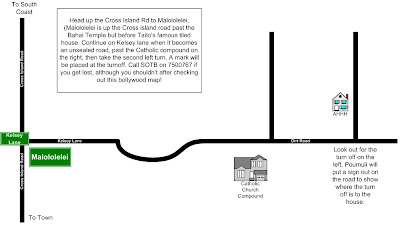 Talofa Hashers - Monday the 24th of January 2011 run number 1552 will be hosted by yours truly and Wahoo, with Dawn Raid as the Hare, up at Malololelei. This area is up the Cross island road past the Bahai Temple but before Taito's famous tiled house. Look out for the turn off on Kelsey Lane. Continue on Kelsey lane when it becomes an unsealed road, past the Catholic compound on the right, then take the second left turn. A hash mark will be placed at the correct turnoff at that point. The "house" is about 100 metres up that track on the left.

We will cater this run, providing some BBQ chicken (other special sauce), so if you are chick-pea eating inclined you may want to bring something veggie (allright, maybe some salads). So bring your S15 for the keg and enjoy a wet run in celebration of Wilma. Suggest bringing towels and wet weather gear.